A testing machine can be considered as a combination of five elements.

1.-Testing frame: structural and resistant part. Manufactured to host the rest of elements and to allow a proper application of load over the sample, without being affected by deformations which could affect test results of materials testing.

2.-Load application system: electromechanic (lead screws, motor, reducers and transmission elements) or hydraulic (piston, hydraulic power unit and servovalve). Other systems as electrodynamic are used as well for particular applications. Their objective is to apply load according to the type of materials test to perform.

3.-Measuring system: set of transducers which converts a physical magnitude into an electrical signal (load cells, extensometers, encoders, etc.). Force, torque, displacement and deformation are the most common parameters to measure.

4.-Control and data acquisition system: manual or automatic. Needed to achieve a proper execution of test and to assure that load and speed ratios will be applied according to test standard or procedure. Control and measuring system are closely related, because the control is based on a command and on the feedback received from the measuring system.

5.- User interface: analogue, digital or computer based. This system is the one which “link” machine and user. It is responsible of presenting clear information, friendly ways of handling data, powerful but simple test configuration, sample definition, etc.

The technological evolution affects in different ways to these systems, generating obsolescences and incompatibilities in some cases.

A testing machine, correctly used and with a proper maintenance can extend greatly its useful life and increase its performance by means of a modernization process. 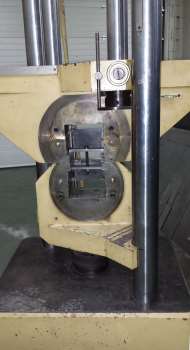 Impact testers are among the machines which can be modernized and upgraded by IBERTEST.

There are different levels of modernization for each case and application. From upgrading of measuring system to total automatization of process.

Modernizations can be carried out over IBERTEST Charpy impact pendulums or over any other producer Charpy pendulum.